Biography
Syran M'Benza (or Mbenza), born in 1950, began his musical career in 1968 in a local band La Banita. Later on, he joined various various other bands, such as Jamel Jazz, Dynamic Jazz Ewawa de Malph, Somo-Somo and Vicky Longomba's Lovy du Zaire. Syran decided to become a professional guitarist, and he worked with Orchestre Kara that played in a nightclub of the same name. But looking for (musical) adventure, he left for Togo and Côte d'Ivoire. He met with Sam Mangwana and Lokassa and played with them in African All Stars for three years. In 1980, he recorded his first solo album, « Kouame ».

In the early 1980s, Syran went to Europe, where he worked with prominent producers of African music in Paris, Eddy Gustave, and he recorded more solo albums for Afro-Rythme, Salsa Musique, Africamania, Syllart on which he was accompanied by the cream of Congolese musicians, for instance Theo-Blaise Kounkou, José Missamou, Ballou Canta. Syran's reputation had been built and he was in high demand as a studio musician for the recordings of countless albums of (mainly Congolese) artists. Even over the following decades, Syran's guitar play features on albums by artists such as Samba Mapangala, Fodé Baro, Ricardo Lemvo, to mention but a few...

In 1982, he teamed up with his friends Nyboma Mwan'Dido, Bopol Mansiamina and Wuta Mayi to form Les Quatre Etoiles who would become one of the most popular exponents of the 1980s soukous scene. They made various albums and toured around the world. Together with Passi Jo and J.P. Ramazani, Syran was also involved in a project called Kass Kass, which resulted in a few albums starting from 1988. 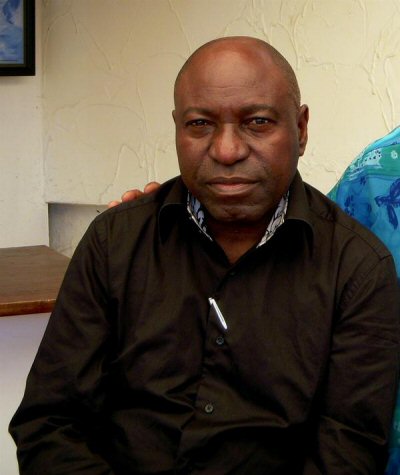 
In 2000, Syran was asked by top producer Ibrahima Sylla to join a new adventure, Kékélé, together with singers Loko Massengo, Bumba Massa, Nyboma, Wuta Mayi and guitar hero Papa Noel.
As CC Smith pointed it out, Kékélé " [proposed] a new direction for Congolese music that would draw from the early foundation of rumba with acoustic guitars and accordion ".
Another quote by BBC's Andy Kershaw can be added to this:
" Kekele, the cream of rumba veterans from the ... Congo - make the most exquisite music. Eric Clapton isn't fit to tune the strings of their lead guitarist, Syran Mbenza."
Fact is indeed that Syran is one of Africa's finest and most accomplished guitarists.


Discography (not including the Quatre Etoiles nor Kékélé albums)