Biography
Sam Mangwana, although of Angolan descent, was born in Kinshasa, where he grew up in an environment which exposed him to music of different styles. Most influential was the Congolese rumba, a re-africanisation of latin and caribbean music, extremely popular in the two Congos since colonial times. Musicians such as le Grand Kallé (Joseph Kabbasele), Dr. Nico, and Franco were the main pioneers of the new Congolese rumba.

As a teenager, Sam had already penned a couple of songs which he proposed to Tabu Ley Rochereau. Soon he was asked to join Tabu Ley's band, African Fiesta. In 1968, he left the band and formed Festival des Maquisards together with Dizzy Mandjeku. This new band showed unstable and after some production work, he was approached by Franco to join his TP OK Jazz in 1972.

He stayed three years with TP OK Jazz, returned briefly to Tabu Ley's, and went finally to Abidjan in 1976. In 1979, he established his own SAM label. He recorded several albums, and his biggest hit during this period was « Maria Tebbo » in 1982.

His contribution to the Congolese music scene and to African music in general is beyond discussion. 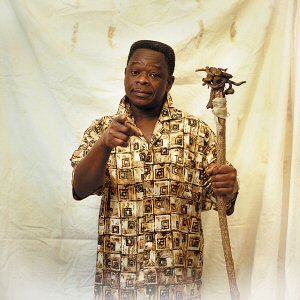