Biography
Les Quatre Etoiles were formed by four prominent singers and instrumentalists, Nyboma and Wuta Mayi (or Wuta May) as vocalists, Syran M'Benza on lead guitar and Bopol Mansiamina on rhythm guitar. Being composed of accomplished musicians with a longstanding career in various other groups as well as in solo performances, Quates Etoiles is often referred to as an African supergroup. The band was formed when all four members had settled in Paris in the early 1980s. A separate page of this site is dedicated to Nyboma, but also Wuta Mayi has a long career to show for. He has been singing in various groups such as Orchestre Jamel National, Orchestre Bamboula, Orchestre Rock-a-Mambo and Franco's TP OK Jazz. Guitarist Syran M'Benza has played in Orchestre Somo Somo, Orchestre Lovy du Zaïre and Sam Mangwana's African All Stars, to name but the most important ones. He also recorded several solo albums. So did Bopol, who has played with Tabu Ley Rochereau's Afrisa and Orchestre Ya Toupas.

The repertoire of Quatre Etoiles is, apart from new compositions, based on reinterpreting former hits of each of the four members, remoulded in a modern Paris-flavoured soukous using Paris studios and high tech production. One could argue that the music of the Four Stars has become a shallow and commercial version of what has been played before in Kinshasa, but this would not do justice to the songs Quatre Etoiles recorded. As can be expected from Nyboma and Wuta Mayi, the singing is excellent, and the guitar of Syran M'Benza of rare beauty.

The Quatre Etoiles were successful for several years, but as the soukous rage had been long replaced by ndombolo fever, most members regrouped again in the more acoustic approach of the rumba revival band Kékélé, under the artistic direction of producer Ibrahima Sylla. 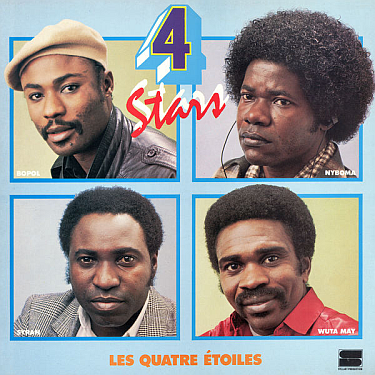