Biography
Papa Noël received his name as he was born on Christmas Day in 1940, his real name is Antoine Nedule Montswet. He started playing guitar that his mother had given to him, and in 1957 he was asked to accompany Léon Bukasa on a record. Soon after that, he was approached to join a new group Rock-A-Mambo. In the following years, he has played in several bands that were popular at that time: Orchestre Les Bantous de la Capitale from Brazzaville, African Jazz, and Orchestre Bamboula, where he was the band leader.
From 1978 on, he was a guitarist in Franco's T.P.O.K. Jazz until Franco's death in 1989. Over the years, he was a dedicated member of TPOK Jazz, although he made one solo album in 1984, « Bon Samaritain », which didn't please Franco who disliked his band members having own projects.

In 1991, so after Franco's death, TPOK Jazz toured in Europe. At the end of this tour, some members decided to stay in Brussels to form Bana OK, Papa Noel was among them. He also participated in in Rondot's album « Bakitani », which was released under the name of Bana OK.
Although Papa Noel is by then seen as a respected guitarist, both as solo, rhythm and mi-solo (in Congolese rumba an intermediate guitarist interplaying between the solo and rhythm guitar), public acclaim came relatively late. Apart from the success of « Bon Samaritain », it was Papa Noel's contribution to Sam Mangwana's album « Galo Negro » (1998) that draw more atttention to him.
Further, in 2000, a compilation album « Bel Ami » came out, followed by the first Kékélé album in 2001.

New projects were initiated, like recording sessions with Cuban musicians Adan Pedroso and Papa Oviedo, trying to explore the mutual roots of afro-cuban music and Congolese rumba. Papa Noël's illness (Nedule is diabetic) prevented him temporarily to engage in more concerts and new ventures. He even had to miss out the 2003 Kékélé album. In 2004, however, he toured with a group named Bana Congo, with singers Nana and Baniel (both formerly with OK Jazz) and an all-Cuban band. 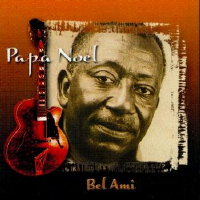