Biography
Fodé Baro was born in Kissidougou in the Kankan region of Guinea. His father, Ibrahim Khalil Baro, was a prominent islamic teacher (marabout) and his mother, Samatenin Touré, nurtured him with her fula (Peul) culture. Fodé's mixed origin (his father being malinké) broadened his horizon, but his first interest in music, inspired by the great and late Aboubacar Demba Camara (of Bembeya Jazz), was stopped by his family as both parents are of noble descent, who are not supposed to sing or make music. In addition, the long tradition of his father's family in engaging in islamic teaching played a significant role in rejecting his musical activities. These activities, nevertheless, had already took off when he was a teenager and he played percussion, n'goni and guitar at various occasions including cocktail parties at the presidential palace. Because of the difficulties with his family, Fodé quit school and left for Sierra Leone and Liberia. During those difficult years, a French priest helped him out and teached him to read musical notes, and Fodé even sang in a church choir.

In 1985, Fodé Baro returns to Guinea where he met Myriam Makeba, who introduced him to her daughter Bongi Makeba who was looking for a bass player in her band. For a period of 8 months, Fodé played with Bongi during her European tour, and they made an album together. The untimely death of Bongi put an early end to this fruitful cooperation, and Fodé entered the band Les Messagers of Mory Findian. 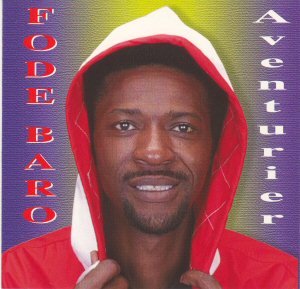 Album cover « Aventurier »
Looking for an international career, he settled in Paris in 1990. He entered the Bastille school of music and starts creating his own style, afro-zouk-mandingue. Together with musical arranger Philippe Guez he records a first solo album, « Donsoké » (Hunter) in 1992. During the mid-1990s, Fodé Baro was an important participant in the « Sans Papiers » compilation albums, produced by Ibrahima Sylla. Fodé was involved in the first three out of the series of four albums, either as singer, arranger or as bass player.

His second album « Aventurier » has been an even bigger success as major African radio stations such as Africa No.1, RFI, MCM Africa aired his song « Yirikikiki » extensively. Both this, and his Sans Papiers contributions, have turned him into the best-known Guinean artist in other parts of Africa outside his home country.
The album « Foufafou » (meaning "nothing" in Susu) has been partly recorded in Senegal (with the help of Philippe Monteiro), and some songs have been recorded in Abidjan (with featurings by DJ Lewis, DJ Bordo and Soum Bill). In late 2008, Fodé Baro received the Djembe d'or award in Conakry for the first cassette volume, « Foufafou, Acte I ».