Biography
Ali Farka Touré was a farmer, and a singer-guitarist, who plays in a distinct style, very close to the blues. Based on traditional songhaï music, he also uses Fulani (Peul), Touareg and Bambara elements, singing accordingly in one of these languages.

Ali was born in Gourma-Rharous, where his father died when Ali was two years old. At age of seven, Ali was sent to his uncle in Niafunke (Niafodié) where he grew up, working hard on the fields. He was not given the opportunity to attend school. Nine brothers of Ali died at infant age, but Ali continued to struggle, which gave him his surname of "farka" (=donkey), reflecting his stubborness.

Ali "Farka" Touré has been making albums since the 1970s and is still one of the most famous Malian musicians and was respected, both in his home country as well as internationally. A contract with World Circuit and his subsequent collaboration with Ry Cooder brought the international acclaim he deserves, although he remained a modest man, and was more interested in farming and helping young artists of his country than in receiving international awards. Returning to farming, he invested a lot in what became his home town Niafunké, and in 2004, he was even elected mayor of the small town.

Besides rereleases of his older albums, Ali Farka continued to record, and in 2005, he made « In the Heart of the Moon » with Toumani Diabaté, an album that received much acclaim. He received a second Grammy Award for it. In 2005, he recorded his last solo album, « Savane », and only shortly after he approved of the result of the recordings, he died of bone cancer on 6 or 7 March 2006. The album was released posthumously in July 2006. After his death, his former band member Afel Bocoum continues to make music following the legacy of Ali Farka's music. His son Vieux Farka Touré has become a successful musician. 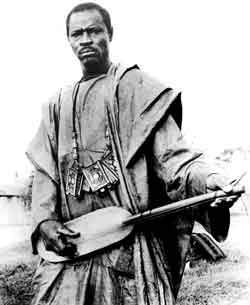