Biography
Bassekou Kouyaté is seen as the world's best n'goni player. Born in the second half of the 1960s, he grew up in a traditional family of musicians, his mother Yagaré Damba was a praise singer, his father Moustapha Kouyaté and his brothers were n'goni players. When he was 12 years old, he was already mastering the n'goni lute, and in 1979, when his father was ill, Bassekou accompanied his mother on n'goni during her tour in Côte d'Ivoire and Burkina Faso. From 1983, he worked with Nainy Diabaté's husband and guitar player Cheick Oumar Diabaté. Together, they accompanied, besides Nainy, also other singers such as Tata Bambo Kouyaté. In 1987, he met Toumani Diabaté with whom he recorded on two albums and toured extensively in West Africa, and performed on the Dranouter Folk Festival in Belgium.

After a Banjo Festival in Tennessee, Bassekou got acquainted with Taj Mahal with whom he recorded together. His name was rising and increasingly he is invited to play with numerous artists, in Mali, for instance with Keletigui Diabaté, Ali Farka Touré, Cheick Tidiane Seck, but also on an international level: Bassekou has played and/or recorded with Carlos Santana, Jackson Brown, Bonnie Raitt...

In 2003, he created his own group, Samagéra, together with his wife Amy Sacko, balafon player Lassana Diabaté, Adama Diarra (djembé) and Fousseyni Kouyaté (bass n'goni). He performed in Holland and Belgium in 2005. With his current band, renamed into Ngoni ba, he recorded a long awaited first album, « Segu Blue », out in March 2007. The album features guest musicians Zoumana Tereta, Lobi Traoré and Kassemady Diabaté and is already a classic.

The follow up, the 2009 « I Speak Fula », was nominated for a Grammy Award and in 2013 he released a new album, recorded in March 2012, just when the military putsch took place in Mali, an event which was the beginning of a period of crisis in the country. The political situation gives the album a sense of urgency that was certainly not planned that way. On the album he is accompanied by his two sons Madou and Moustafa Kouyaté, and with featurings by Khaira Arby, Zoumana Tereta and Taj Mahal.


" ... Never really breaking into a sweat, in fact barely shifting his gentle grin for a moment, he will break out these terrifyingly complex solos somehow conjuring notes from God knows where. The ngoni he plays only has three strings, how he does what he does remains a total mystery." Damian Rafferty Editor and Publisher of Fly | Global Music Culture [external link] 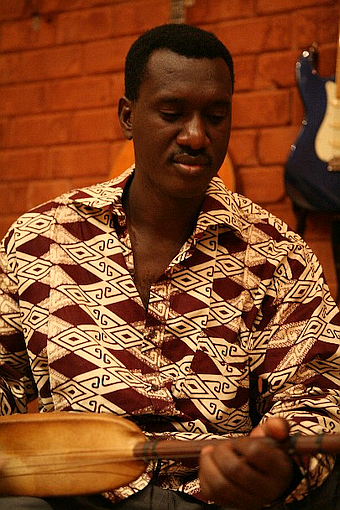