Biography
Kassé Mady Diabaté is a descendant of a great family of malinke griots, musicians by birth. Born in Kela, a village with a strong griot history, he received a traditional education as a griot. At a young age, he joined the Super Mandé of Kangaba, a small town South West from the capital Bamako, and relatively close to the Guinean border. This is the core region of the Malinké.
In 1972, he joined Orchestre National Badema, a national orchestra. Several of its band members came from les Maravillas du Mali, a band formed by Malian students in Cuba, and the Afro-cuban influences were omnipresent. National Badema, however, tried to use Malian musical elements, drawn from Malinke, Bambara and Songhai cultures.

Two albums of National Badema were re-issued in the second half of the 1980s, and a compilation of these tracks again on CD in 1999. Otherwise, not much is written on the band that was, nevertheless, quite successful in Mali for two decades. The title song of the Nama album was one of their biggest hits and is typical for National Badema.

Towards the end of the 1980s, Kassemady was invited to Paris to record a high-tech album with Boncana Maïga, a producer and arranger who also helped Salif Keita break through on international markets with Salif Keita's « Soro » album. A second, acoustic, album « Koulandjan Kela » follows shortly after. He stayed in Paris for 10 years but returned to Mali disappointed, after having been exploited by producers. His gentle and humble character was too much a barrier for defending his rights as an artist.
When he came back to Bamako, the music scene was much more alive. Toumani Diabaté soon asked him to work with him on his Kulanjan album. Kasse Mady's 2002 album « Kassi Kasse » is recorded in his village Kela, together with his brother Lafia Diabaté and his band Super Mandé (named after the old band in Kangaba).
Kassemady was gifted with an extraordinary voice, volatile but always fully under control. In 2018, he was struck with illness and he died in the night from 24 to 25 May in a Bamako clinic. 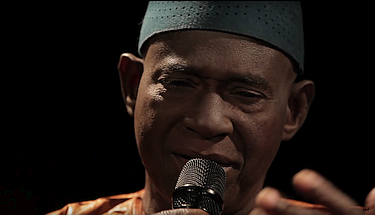