Biography
Toumani Diabaté is an extremely talented kora player of the present-day generation. At the age of 21, he recorded a much acclaimed album « Kaira », where he mixed the sound of this ancient 21 string instrument with nowadays textures, without any other instrument or studio mixing nor dubbing, just himself, the instrument and the microphone... But then again, his talent didn't come as a surprise, since his father, the late Sidiki Diabate, has been known as le roi de la kora. Subsequently, Toumani was called le prince de la kora.

In the early 1990s, he participated in the Songhai project, a collaboration with the Flamenco group Ketama, which resulted in two albums, « Songhai », and « Songhai 2 ».

His album « New Ancient Strings (nouvelles cordes anciennes) » is a re-interpretation of the album « cordes anciennes », recorded in 1970 by Sidiki Diabate (Toumani's father) and Djelimadi Sissoko (Ballake Sissoko's father). The music of that historic album is still played on national radio on important national holidays, such as Independence Day.

Toumani has recorded with many artists, and he made albums with Ali Farka Touré, and in 2014 with his son Sidiki Diabaté. 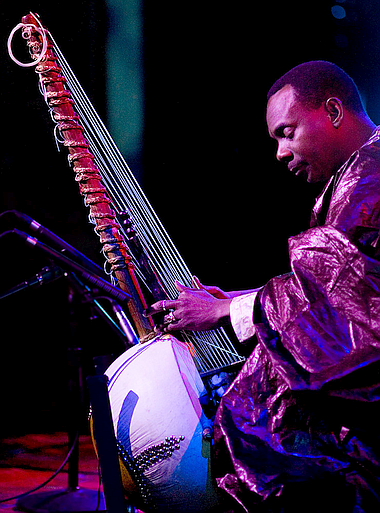