Biography
Son of the late threefold Grammy Award winner Ali Farka Touré, Vieux Farka Touré grew up with music and with the talent of his father. Soon his talent as a drummer and calabash player began to show, but his father was against Vieux to become a musician as he himself had suffered a very long time before getting the acknowledgement. Ali did not want his son to have to face the same hardships. He decided that Vieux should become a soldier instead. In secret, Vieux played along with his father's recordings, thus pursuing his musical aspirations. In 1999, he enrolled in the Institut national des Arts (INA) in Bamako where he found out that he would rather play the guitar and compose his own music. When he left the INA, he was already an accomplished guitar player. By that time, Toumani Diabaté had noticed his talent and asked him to play in his accompanying band. In the following years, he toured with Toumani's band in France and South Africa, and even accompanied his father at occasions.

In 2005, Vieux contacted his friend Eric Herman, a North American musician and producer with whom Vieux had played while he was a student at the INA in Bamako. They both estimated that it was time for Vieux to record a first album. Toumani Diabaté participated in the recording of a few songs, and more remarkably, also Vieux's father Ali Farka Touré, then already increasingly ill, contributed to the album, thus eventually showing his approval of Vieux's choice for a music career. Other contributors are star-n'goni player Bassekou Kouyaté, Seckou Touré, and younger talents such as vocalist Issa Bamba, Mahamadou Kone and Adama Diarra.

The debut album is one the one hand very much a passing of the torch from father to son, but on the other hand also shows a style of its own, as the northern Malian blues is mixed with influences of rock and reggae. 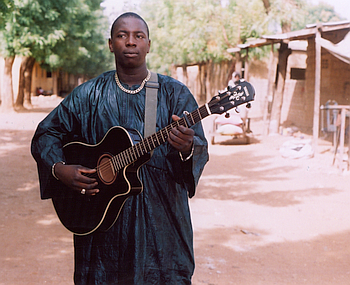