Biography
Afel Bocoum released his debut album in 1999, yet, his musical career goes back to 1968, when, at the age of 13, he was called to join the troupe musicale de Niafunké by Ali Farka Touré and Harber Maiga. Touré was already known to the Malian public by then, and Maiga was a very gifted singer, who died in 1983. Harber Maiga was like an artistic father for the young Afel until he left the troupe in 1975. Afel then won a scholarschip in agricultural education and went to M'Pessoba in the south of Mali.

His career as an agricultural trainer brought him to Djenné, where he could continue to play music in his spare time. He could even use his music for passing through information and new ideas on social and agricultural issues to farmers, especially after he was able to work again in Niafunké, his home town. This may sound surprising, but Malian farmers read no newspapers and have no access to television, especially not decades years ago...

He created his own band Alkibar in 1983, but he also continued to play in Ali farka Touré's band Asko. 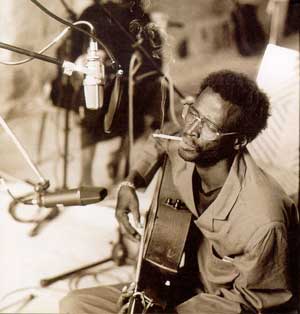