Biography
Thione 'Ballago' Seck is, at least in Senegal, as famous as Baaba Maal or Super Diamono. Internationally though, he never managed to break through as did Youssou N'Dour or Baaba Maal. Yet his career already starts in the 1970s, when he became the lead singer of Orchestre Baobab, and was responsible of one of their biggest hits ever, « Mohamadou Bamba » (1980).
Due to artistic differences with other members of Baobab, Thione left and established his own band, le Raam-Daan (=crawling to reach your goal). His younger brother, Mapenda Seck, who was also a singer in Baobab, joined him soon.

Thione won much acclaim in Senegal throughout the 1980s, but given the media landscape in this country, it was difficult to get out of the shadow of the predominant position taken by Youssou N'Dour. Thione's musical style is very recognisable, his "cool", melodic way of singing floats freely over the frenetic mbalax rhythms counterpointed by energetic sabar percussion.

Throughout the 1980s and 1990s, he released several albums, numerous cassettes for the Senegalese market, and some albums also reached an international audience. In 2003, he recorded an album with oriental influences, mainly Indian, as he always liked to listen to Indian film music. This album, recorded between Dakar, Cairo and Bombay, has been released on CD in 2005.

In 2015, he started having troubles with the Senegalese justice after allegations about fake money.

His son Wally Ballago Seck is also a successful singer and seen as the 'enfant terrible' of the Dakar jet-set. 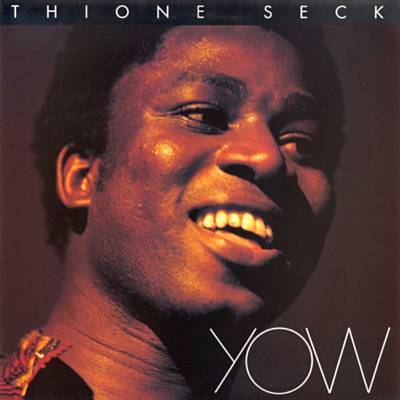