Biography
Singer and composer Omar Pene created Super Diamono together with Ismael Lô. They started first to play traditional music. After some years, they introduced electric guitars and joined the new mbalax style en vogue in Dakar since he end of the 1970s. Yet, Super Diamono have a distinct style that is easily recognizable, partly because of the vocals, but also because of the jazzy feel of their music. For more than 40 years now, Super Diamono has been addressing issues concerning the youth in their lyrics. This accounts for their hugh popularity among younger generations of Senegalese.

Over the years, several musicians left the band for solo careers, such as Ismael Lô who left in the mid-1980s for a solo career. He wass replaced by Mamadou Maiga. Moussa N'Gom came from Guelewar but left in 1988 to create his own band. Others (Lamine "Lemzo" Faye) left to create off-shoots such as Lemzo Diamono. Omar Pene took over leadership in the band, in order to promote his solo career, while Super Diamono remains his band, and together, they continue to show both talent and craftmanship. 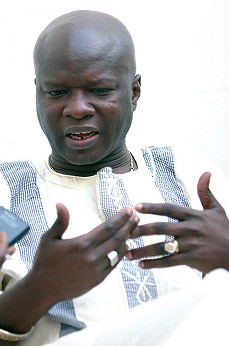