Guelewar Band of Banjul
(The Gambia)

Biography
Guelewar Band of Banjul has been further developing the afro-manding sound of Ifang Bondi during a short period in the late 1970s and early 1980s. With strong percussion, a psychedelic tinge, prominent keyboards and saxophones, Guelewar's music is an "Aha-Erlebnis", but surprisingly enough, not a single album has been reissued on CD, whereas their LPs are sometimes offered at horrendous prices. Not much is written on the group except that the band leader was Laye N'gom, who was formerly with the Supreme Eagles which became later Super Alligators.

Youssou N'Dour considers Guelewar as a main inspirational influence, partly because of the use of lyrics in a noble wolof as opposed to "street" wolof, and partly because Guelewar had resolutely moved forward from latin and highlife to an explosive mix of soul and funk with Senegambian rhythms such as Boogaraboo and Ndaga. Lead singer Moussa N'Gom has had a strong imprint on Guelewar's music with his expressive voice. He later left to join Omar Pene's Super Diamono before starting a solo career. Moussa also made a cassette with the Ensemble Lyrique Traditionnel du Senegal (1995) and he has recorded with Thione Seck. His current band is called le Groupe Talibe.

But with the current interest in afro-soul and afro-funk from the 1970s, a small label Teranga Beat has released live recordings, and in 2012 a compilation album was released carrying the title « Touki Ba Banjul: Acid Trip from Banjul to Dakar ». 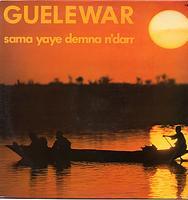