Biography
Youssou N'Dour is undoubtedly one the most famous African artists. Singing since the age of 12, he started his musical career with the Star Band de Dakar. By 1979, he established his own group, the Etoile de Dakar. Due to a split-up, the group continued as Super Etoile as of 1981. They became the most succesful outfit in Dakar, with a constant production of albums for the Senegalese market throughout nearly three decades.

It was with the same band that Youssou gained first international recognition through the album « Immigrés ». The rock-solid instrumental powerhouse of Super Etoile and Youssou's signature tenor voice brought him the attention of Paul Simon, on whose album Graceland he featured, and especially of Peter Gabriel. He toured extensively with Gabriel, and with the 1988 Amnesty International tour with Sting, Bruce Springsteen, Peter Gabriel, and Tracy Chapman. Youssou N'Dour started producing records for international audiences and on major labels, such as the albums « The Lion » (1989), « Set » (1990) and « The Guide / Wommat » with considerable success.
Internationally, the success of the single « Seven Seconds » with Neneh Cherry has been of pivotal importance in his career. But his influence on Senegalese music and African music in general has been bigger than that, he has a lasting impact on how the Western world regards Africans and African music. Now, he is seen as the most prolific and influential African artist, who is able to remain successful both in Africa as on the international level.

Youssou N'Dour adapted his music on CDs to Western listeners, but he never forgot his roots. He still lives in Dakar, where he owns a recording studio since 1991 (Xippi), a record company since 1995 (Jololi) but also a media firm (Futurs Médias) with a radio station, a newspaper and since 2010 also a TV station. He is equally involved in humanitarian issues. In 1985, he organised a concert in Dakar for the liberation of Nelson Mandela and over the years he was active for various international organisations UNICEF, FAO and Amnesty International.

In 2012, his candidature for the presidential elections was rejected by the Supreme Court, but under the new Government he became Minister of Culture and Tourism in April 2012, and then since October 2012 Minister of Tourism. Under a new Prime Minister, he became Special Adviser to the President in September 2013. 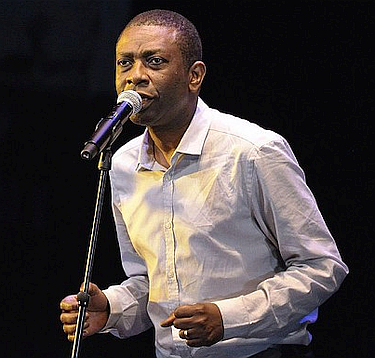