Biography
Orchestre Baobab is one of the oldest and most famous Senegalese bands. Created in 1970 to inaugurate the Baobab nightclub, several members were recruited from the Star Band, the oldest band in Senegal, established in 1960 during the independence days. The principal members from the start were from various ethnic descent and nationality: Balla Sidibé, a peul from Senegal, Laye M'Boup (a wolof griot, who died in 1974 after a car accident), Issa Cissako (mandinka), Rudy Gomis (from Guinee-Bissau) and guitar player Attisso who came from Togo. They all brought their heritage and style and created the distinct Baobab sound.

Laye M'Boup was replaced by Thione Seck who was responsible of one of Baobab's biggest hits ever, « Mohamadou Bamba » (1980). Thione left and established his own band, and his younger brother, Mapenda Seck, took his place.

Their biggest hits were in the 1970s, the LP « Ken Dou Werente », reissued on CD as « Pirates Choice » was the last album of Baobab in its original composition. Balla Sidibé continued with Baobab Nouvelle Formation but with limited success. Due to the success of the CD re-issues, nearly all original members came together again and performed on Womex 2001 in Rotterdam. Those fans who were there, know that they sounded as in the old days!

An all-new album, has been released in September 2002, and has been well received with remarkable press coverage. Since then, Baobab are touring extensively all over the world. In October 2007, a new album « Made in Dakar », comes out, with new versions of old hits such as « Ndeleng Ndeleng » and « Cabral ». 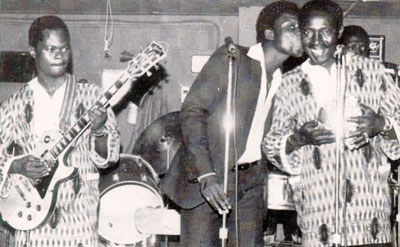