Biography
Habib Koïté hails from the Khasso region (around Kayes), in the western part of Mali, close to the Senegalese border. According to various sources, he was born in Senegal, from Malian parents. After high school, he went to the Institut National des Arts (INA) in Bamako to study music. After graduation in 1982, he began to teach guitar at the same institute.

Being from a Khassonke griot family, his music is both contemporary and very pure music, derived mainly from the "danssa" rhythm, but Habib combines it with rhythms from various parts of Mali, as well as with blues. In 1988, he created his own band, Bamada, after the popular name for Mali's capital Bamako. He won the first price at the Voxpole Festival in Perpignan, France, and he was able to record two songs, « Cigarette a Bana », and « Nanalé ». With the latter, he won the Prix Découverte RFI in 1993.

It was the start for the international acclaim which he gathered through participating in several (world) music festivals. It was only in 1995, that he finally recorded his first CD in Belgium. Habib & Bamada started to tour extensively throughout Europe, Asia and North America. His second album, on which he used relatively more traditional instrumentation, came out in early 1998. All albums met remarkable success and the energy of his live performances was captured in a live double album « Foly ! ».

In recent years, Habib increasingly seeks to cooperate with other artists, which started with co-writing a song on Bonnie Raitt's album « Silver Lining » in 2002, and continued with his participation in the Acoustic Africa project with Vusi Mahlasela and Dobet Gnahoré in 2006. He was also part of the 2011 installment of Acoustic Africa with Afel Bocoum and Oliver Mutukudzi, and he had guest appearances with Five Great Guitars. In 2012, he records an album with New York born blues guitarist Eric Bibb. His latest album « Soô » was not recorded with his longtime accompanying band Bamada, but with young musicians, but also with Bassekou Kouyaté and Toumani Diabaté as guest musicians. 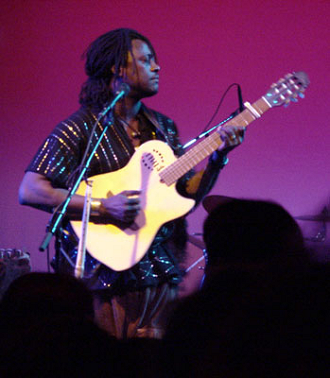