Biography
Doura Barry is a well respected singer songwriter and producer in Guinea. He has helped many Guinean artists by composing for them and by producing them, but he has also produced a few albums of his own.
Born in Kindia, he is Peul (Fula) by his father, his mother is of Könön origin, from the Forest region of Guinea. Both his parents were involved in artistic activities, his mother sung and participated in a theatre group in her home town, and Doura's father played guitar and banjo at Colonial School. As a teenager, Doura was given a first guitar by his father and he learnt to read musical notes and very soon Doura joined the school band to sing, accompanying himself on harmonica.

During his stay in the town of Mamou, he started to play the guitar and harmonica together and soon he joined the Bafing Jazz de Mamou. He continued singing as a solo act in hotels, restaurants and at ceremonies. Subsequently, he played at occasions in various bands, such as Tabaro Orchestra, Atlantique Mélodie, Diagba Beat, Syli Authentique, Kaloum Star, Les Messagers and Camayenne Sofa.

In 1986, Doura won a prize at a international music contest organised by the BIAO (Banque internationale de l'Afrique de l'Ouest) with his song « Les filles de mon pays ». This was actually his break through. The song was a big hit in Guinea but also in Mali, and his first cassette with the song sold well. The Guinean radio and televsion station RTG made probably the first Guinean music video clip of this song, still recorded in mono. Doura Barry started to tour extensively in West Africa. He would make various versions of the song (1989, 2014). In 1993, he participated in the RFI Découverte Award ceremony in Conakry. Throughout the years he continues touring in Guinea and surrounding countries.
Parallel to this, he is very much involved in producing, arranging and helping out other musicians, such as Binta Laaly Sow, Amadou Barry Dougaya, Djeli Sayon Kouyaté, Kamaldine, FAC Alliance, Alpha Yaya Diallo, Bill de Sam, Ba Cissoko and many others.

In 1997, Doura Barry participates in the International Tour of Jololi Revue (Jololi Review), together with Cheikh Lo and Dimi Mint Abba. In 2002, he produced an educational cassette « Sécurité alimentaire » aimed at the rural population, and produced by the NGO Africare. The next year, he represented his country at the MASA festival in Abidjan. After so many years, he produced two albums with limited distribution in 2006. 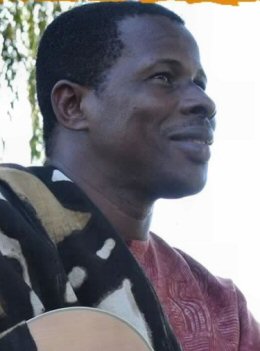