Biography
Cheikh "N'Diguel" Lô started teaching himself to play drums in the 1970s when he lived in Burkina Faso. In 1978, he left for Dakar and played in several bands, such as that of Ouza. Around 1984, he was in Paris working as a studio session musician. Although he had won an award for the best new talent in 1990, for his song « Doxandeme », which was dedicated to the hardships of the Senegalese immigrants in France, Cheikh had great difficulties in starting a career as an artist. A second cassette « Dieuf Dieul » was apparently never released. Cheikh decided to wait for better times. These better times arrived when he met Youssou N'Dour in 1994. By 1995, he was able to record in N'Dour's Xippi studio under better conditions than would have been possible otherwise. The success went world-wide after he signed up at World Circuit, and he is frequently seen at international World Music festivals ever since. He continues to record albums for World Circuit, such as his 1999 album « Bambay Gueej » features, among others, Pee Wee Ellis (ex James Brown).

Cheikh Lô's looks, the long dreadlocks and the patchwork clothing is the typical outfit of the Baye Fall, followers of Cheick Ibra Fall, companion of Cheick Amadou Bamba, prophet and founder of the Mouride Islamic community. 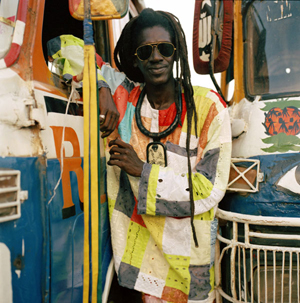