Biography
Kaloum Star was one of the numerous bands in the Guinea of Sekou Touré. The band was founded by 'Maître' Mamadou Barry in 1969 in the Kaloum district of the capital Conakry. Kaloum Star recorded a few 7" singles, and some songs featured on samplers on the prestigious Syliphone label, for example on « 9ème Festival National Des Arts Et De La Culture De La République De Guinée » (Syliphone SLP 42, 1973) and on « Discothèque 74 » (Syliphone SLP 48, 1975).
Unlike other bands, they did not have the privilege to release a full album on Syliphone, nor did they receive the title of National Orchestra. It remains a mystery why, some experts suspect the choice of their musical repertoire, deriving from Susu rhythms, had something to do with it, Sekou Touré was strongly biased towards his own maninka cultural realm (cf. Worldsrv. Blogspot).

Several band members came from famous Guinean groups. In 1987, they embarked on a European tour, during which they performed at the Melkweg venue in Amsterdam. It was only in 1996, that their first CD came out in France. Their music is a modernised version of Guinean folklore, mixed with urban jazzy influences.

In 2015, the six songs from the 7" vinyl records were compiled on a digital-only album release. The band is no longer active, several band members engaged in solo activities. Band leader 'Maître' Mamadou Barry, for example, released a solo album « Niyo » in 2009. 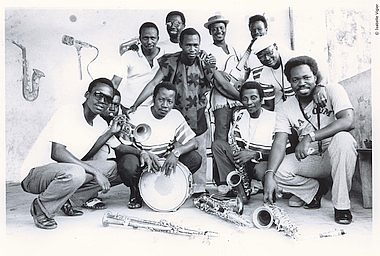