Biography
Fac Alliance are a well-known hip hop outfit from Guinea. Although created in Conakry, two of the group's members, Abdoul Kader Sylla a.k.a. Nondi K and Amadou Gueye a.k.a. Pap G started their career in the town of Kindia, in a group called Bad Boys de Kindia. In 1993, they settled in Conakry to continue their studies at University and they formed FAC Alliance (Fac is short for Faculté, a popular word used for University). For a short stint, they had a female rapper included in the band, Miss Hot, but their cooperation didn't last. On and around the university campus they became quite popular, and in 1996, they met Doura Barry who liked their style and agreed to help Fac Alliance in their career. Through Doura Barry, they met the third member, Mista X or Masta X. Together, Fac Alliance were looking for their own style, mixing (West-)African elements with American hip hop, soul, reggae and dance hall.

Through the Centre culturel franco-guinéen they teamed up with Don Lucas, a music producer. In December 1999, they entered the studio to record their first album « Lougagnyi », which successful songs such as « Mariama », based on Baaba Maal's song. In 2002, they released a second album, « Embargo », on which they offered space to other musicians and rappers, only a part of the songs is actually by Fac Alliance. Popular songs from this album are « Pauvreté » and « Telephone Love ».

In 2004, a third album « Kakilambe » came out. It was recorded in the Seydoni studio in Ouagadougou and released by Seydoni Mali. Unfortunately, Fac Alliance has never signed international contract, which is a shame since their music is of world class, and few hip hop outfits sound as "African" as Fac Alliance, through the use of African instruments such as the kora, talking drum, as well as through using an original African song, as in the case of the song « Mariama ». 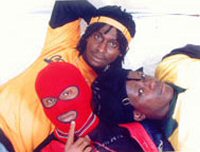