Biography
Super Cayor de Dakar is a band mixing that typical Senegalese mbalax music with salsa, ever so popular in Senegal as well as in the rest of Africa. The band was set up by guitarist Birane Cissé "M'Bol" and by Mapathé Gadiaga "James" who has been singer in Royal Band de Thies, Laghem de Kaolack, Xalam and with Ibra Kassé's Star Band.

The band, previously called Le Super Cayor et son Salsa Mbalax, plays a mix of salsa and mbalax, as the timbales have been replaced by a set of Senegalese percussion. They benefitted from a salsa revival in Senegalese music in the 1990s, illustrated by the success of the first Africando albums.

After three cassettes releases in Senegal, a first CD issue was brought out by Günther Gretz' Popular African Music label in 1997. Two years later, they toured in Europe, but their biggest international success can be derived from their prominent featuring on a compilation CD African Salsa (Stern's/Earthworks) issued in the same year, taking several songs from the « Sopenté » album.

In 2002, a new album came out, this time with Orchestre Baobab's saxophone hero Issa Cissokho added. The album offers in addition two live tracks, one of which is sounding much more m'balax than salsa and shows another side of this great band. 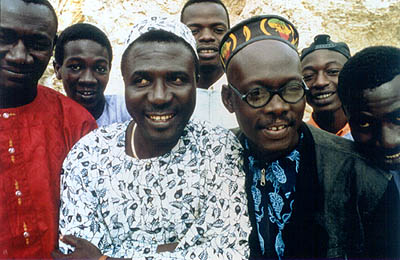