Biography
Xalam has been a very influential band who mixed American funk and jazz with African musical idiom. Sometimes referred to as Xalam 2, as they were inspired by earlier group by the name of Xalam, they started from 1969 or 1970, led by drummer Abdoulaye Prosper Niang and started with non-African dance music, performing in Senegal as well as in other African countries. In 1975, they toured with Miriam Makeba and Hugh Masekela. By then, they had relocated to Paris, where they realised that they had to find their own style, mixing African elements with funk and jazz. In 1979, Xalam participated in the Berlin Horizonte Festival, they recorded their first LP for the occasion. It was the start of a success story: from the Dakar Jazz Festival (1980), a soundtrack for a Walt Disney production (1981), various festival appearances in Europe (1982), an opening concert for Crosby, Stills Nash & Young in Paris (1983) to the recording of percussion tracks for the Rolling Stones album « Undercover of the Night » (1984). In the meantime, they had teamed up with pianist-keyboardist and arranger Jean-Philippe Rykiel.

Their best known albums, now hard to find, are from that creative era: « Gorée » (1983), « Apartheid » (1986) and « Xarit » (1988). In 1988 (1989, according to various sources), drummer and band leader Prosper Niang died of cancer, his death left the group discouraged. They continued nevertheless, with singer Seydina insa Wade and with a new international album release in 1993. Xalam remains active with occasional appearances and a new album is finally released in 2015. 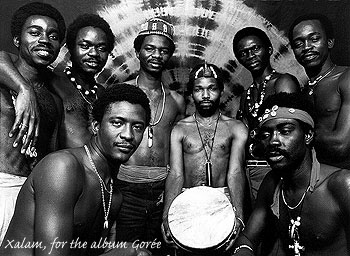