Biography
Seydina Insa Wade was born as a son of an imam in the popular neighbourhood Medina in the Senegalese capital. Apart from quran lessons, he secretely took bass guitar lessons and in 1964, he became contrabassist in the local band Rio Sextet. In 1966, Seydina participated in the 1er Festival mondial des Arts nègres with a folk song in wolof, which was then quite unusual. In the following year he played with Pape Seck's Negro Star and a short time later with Tropical Jazz led by Mady Konaté.

In 1968, he was one of the founding members of the first Xalam group, with Cheikh Tidiane Tall and Idrissa Diop. When the band became the house band of the Sahel Club, they became Le Sahel. Seydina started to perform as a solo artist, and ended up in Paris by 1974, where he recorded a first single « Tablo Ferraay » (1976) and a year later his first album « Gorgui », together with Idrissa Diop.

In the following decades, Seydina continues to work with his friends such as Idrissa Diop, and from 1988, after Prosper Niang's death, he would become lead singer of Xalam for six years. He becomes involved in theatre, and forms a duo with French violoncello player Hélène Billard. With Hélène, he records an album and in 2009, they form with two other French musicians the Wade Quartet.

Seydina Insa Wade was one of the pioneers of a more acoustic style of Senegalese music, thereby bridging the gap between tradition and modern life. In his music as well as his experiences in theatre, he has a sometimes rebellic view on society in Senegal and on politics in his country. Moreover, he has done a lot for the emancipation of the wolof language as a means of cultural expression. 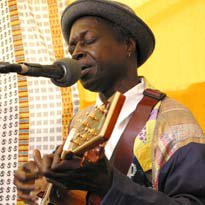