Biography
The Royal Band de Thiès was formed by Mapathé 'James' Gadiaga in 1972, after he had left a school band Cayor Rhythm de Thiès. He soon called upon singer Adama Seck 'Secka' to join him. In their hometown Thiès, the second city of the country with more than 300,000 inhabitants, located around 70 kms East of Dakar, the Royal Band frequently performed in various clubs and venues, and recorded in Club Sangomar. Only occasionally they performed in Dakar.

They released a few cassettes and made it to reasonable fame in Senegal but never made it to international audience nor to an international release. Only a small in-crowd of Senegalese music fans was familiar with them until small Dutch label Dakar Sound released a number of their songs on their compilations. Their music is loved for the expressive, soulful vocals and the raw and funky rhythms. The Royal Band's style of mbalax is quite recognisable.

In 1984, Mapathé 'James' Gadiaga left to join Super Diamono before engaging in other musical adventures, (Johnny Clegg, followed by a period in France), before creating Super Cayor de Dakar back in Senegal.

Another niche label for Senegambian music, Teranga Beat, uncovered their first recordings from 1979, thus far unreleased. The album « Kadior Demb » is the first full-length album available after so many years. Singer Adama Secka made a few solo albums for the Senegalese market.

The Royal Band was quite instable in personnel, and Secka' formed another band, called Super Royal Band. Recently the band was renamed in Secka et les Damels, after the former leaders of the Cayor kingdom (16th - 19th Century). A new album « Wakh » was released in 2015. 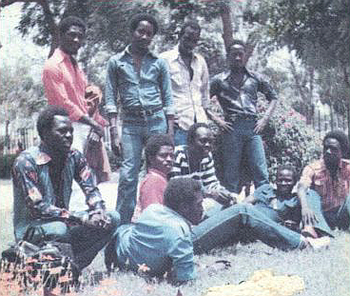