Biography
Abdou Guité Seck started singing as a boy at various occasions, such as in school bands and at various cultural activities in his neighbourhood where he lived. When he was 13 years old, he already received a price of Golden Voice in his home town Saint Louis, in the North West of Senegal. He sung with the Regional Orchestra, later with the National Orchestra.
He met some French and Senegalese music friends in Saint Louis, which was the starting point of the formation of Wock, a French-Senegalese band created in 1996, gaining international recognition rapidly with their mix of rock and mbalax, hence their name (Wock being a contraction of wolof-rock). Abdou became the lead singer of Wock. He met various international stars such as Paco Seri, Phil Collins, Richard Bona, Paolo Fresu, Youssou Ndour and Austrian jazzman Joe Zawinul, with whom he worked together on the Saint Louis Jazz Festival in 1997. In 1998, he was invited to sing on one song « Bimoya », on Zawinul's album « World Tour ».

After their selection for the RFI Prix Decouverte Awards in 2000, an international album « Kemaan » was released, and in 2001, another French music award (Victoire de la musique) was granted in the category Best World Music Album of the Year. In 2002, his contract with Wock ended, and Abdou decided to start a solo career. In the same year, he created his own band and recorded a first album, « Evolution ». In 2003, a second album « Coono Aduna » (meaning "the tribulations of life") followed. The two albums were put together on one CD the next year. 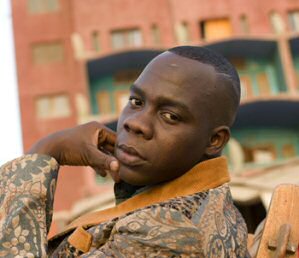 Abdou Guité Seck
With « Coono Aduna », Abdou Guité Seck gained the respect of both public and critics in Senegal and he can be counted among the main artists of the country. The CD release brought along international attention for him as a solo artist, and in October 2004 he was awarded during the Djembe d'or ceremony in Guinée-Conakry. In the following year, he was selected to represent his country at the Jeux de la Francophonie 2005 (Francophone Sports Games) in Niamey (Niger). Later in 2005, he toured in France and Italy, playing in front of a public of thousands of people, mainly of African origin.

His 2005 studio album, « Dëkaale » ("neighbourhood") aims at a more international public. This is also true for his next album, « Dou Leebi Neen ». where he invited Guinean star Fodé Baro, Cabo-Senegalese singer Philip Monteiro and Senegalese diva Khar Mbaye Madiaga as guests. His music, although based on mbalax, is less a mean up-tempo mbalax as many of his colleagues produce nowadays, but gives more attention to the lyrics and to mixing various musical styles. Yet, more attention from non-Senegalese public is still lacking, unfortunately.