Biography
Richard Bona started singing in the village church at age of 5 years old, accompanied by instruments as a wooden flute and hand percussion. Later, he built his first 12-string guitar and when he was eleven he was already performing after he and his parents had moved to Douala.
In 1980, a French hotel owner asked him to assemble a jazz band for the hotel's jazz club. Although he had no particular knowledge of jazz, he spent all day in the hotel listening to jazz records, learning how to play various instruments and learning to compose songs. By chance he heard the self-titled debut album of Jaco Pastorius, the bass player of Weather Report, and he decided to become a bassist.

In 1989, Richard Bona moved to Paris where he played with French musicians but also with fellow Africans Manu Dibango and Salif Keita.
When moving to New York in 1995, he soon joined the Zawinul Syndicate and Bona has since worked with Pat Metheny, Herbie Hancock, Chick Corea, Harry Belafonte, Paul Simon and many others.

His solo career only started in 1999, where he showed his talents as a songwriter, multi-instrumentalist but also as a singer, with his debut album « Scenes from my life ». The album goes back to the memories of his native Cameroon. The album is a must for any music lover, and although Bona claims that this first album was recorded rather quickly (in 3 days), it is difficult to imagine how the result could have been any better if more time was available... 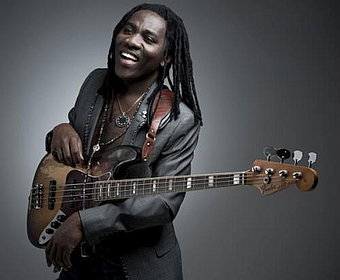