Biography
Manu Dibango is definitely among the best known African artists outside Africa. His career is long and full of (musical) adventure. As a boy of 15 years old he was sent to Paris to pursue his school education, but his love for music was stronger, and he studied classical piano and, later, saxophone. In 1956, he went to Brussels, where he played with several jazz bands. From 1961 to 1965 he stayed in Kinshasa and played with le Grand Kalle, one of the pioneers of the new Congolese sound based on the rumba.

Back in Paris, he continued recording singles, and around 1970, a first album came out. His third album, « Soul Makossa », especially with its title track (originally the b-track of a single dated 1971), was his international breakthrough in 1973. The success gave him the opportunity to go to the USA and play with some big names in jazz music. A later stay in Jamaica during 1979 inspired him to record some reggae albums. Even throughout the 1980s and 1990s, he continues to look for new inspiration, and he frequently records with other artists. A remarkable man. 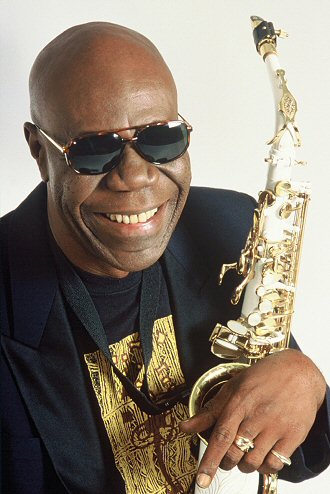