Biography
Sekou Kouyaté is a singer, n'goni and guitar player since many years. He was born in the town of Koulikoro, where he started his musical career as a singer in the Appolo ensemble in the Koulikoroba neighbourhood around 1974. After a year, later he joined le Mégastar de Koulikoro for a short while. Soon, he was invited by the Department of Culture to join the Orchestre Sandya de Bamako. In 1978, he was called to join the Orchestre Bamasaba, the orchestra of Bamako district.

In 1981, he was the replacement of Salif Keita and Mory Kanté after the two had left the Rail Band. Around 1987, he started a solo career, and eventually in 1990, he recorded a first album.

Since then, he recorded a few albums, and signed up for the arrangements of Djeneba Seck's album « Djourou » (2000). 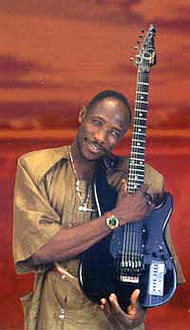