Biography
The Rail Band has been created as the house band of the buffet of the train station in Bamako by Tidiani Koné, saxophonist and bandleader. Twice a week, the band played in the station's restaurant and was successful. Soon, the band was joined by a young singer Salif Keita (in 1970), and later by Mory Kante and guitar player Djelimady Tounkara. Mory Kanté played balafon and guitar but took over as a lead singer from Salif who was forced to leave, allegedly for being often late at concerts. Another lead singer of the mid-seventies was Makan Ganessy, who stopped his involvement in music entirely in 1976 as an act of religiousness and he even asked Radio Mali to destroy all his recordings.

Around 1975, the Rail Band went to Nigeria on tour, and recorded a couple of albums. From the beginning, the Rail Band combined the rumba and modern music styles with traditional Malian, mainly Bambara, music to a new electric Mandingo music and therefore the band has been very influential.
In the 1980s, Tidiani Kone and Mory Kante had left, but the Rail Band continued, with a West African tour. In 1990, the band, in the meantime renamed in Super Rail Band made a first step towards an international career.
After a first international release in 1985, a record deal with the French Indigo/Label Bleu in the 1990s turned out to be a good choice. Although the 1994 album wasn't quite as good, the « Mansa » album is a real gem. Despite the fact that they lost their link with the Malian railways, and thus their status as civil servants years ago, with singers like Damory Kouyaté and Samba Sissoko, the Super Rail Band showed a degree of continuity that was rarely seen among the old big orchestras in Mali. Their next album « Kongo Sigui » was released in May 2003, and a European tour from May to July 2003 gave way to more fame. 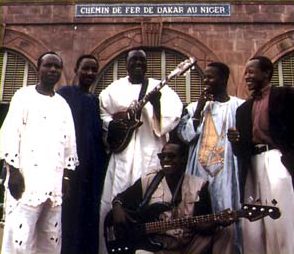