Biography
Mory Kanté was born in what was then French Guinea in a griot family. His father, El Hadj Djeli Fodé Kanté was a prominent griot, and Mory was one of 38 children. His mother, Fatouma Kamissoko, was from Mali, and at the age of 7, Mory was sent to his aunt Maman Ba Kamissoko in Bamako, the capital of Mali. He learnt the vocal traditions belonging to being a griot, and as well as playing instruments such as the balafon and the kora.

In 1971, Mory Kanté joined the Rail Band (full name: Orchestre du Buffet-Hôtel de la Gare de Bamako), where he started playing the balafon, but soon changing towards guitar and singing.
When the principal singer Salif Keita left in 1973, Mory Kanté became the main singer. Several albums were recorded, at least two for the local record label Kouma.
In 1978, Mory left for Côte d'Ivoire. Around 1982, a first solo album « Courougnegne » was recorded. In 1984, he headed for Paris where started to build up an international career, which eventually succeeded with a second version of his song « Yeke Yeke », which entered the charts in several European countries in 1988, even reaching the first position in the Netherlands, Belgium, Spain and Israel.

During the 1990s, Mory Kanté recorded several albums on which he tried to ally Guinean music with modern beats. Since the album « Sabou » (2004), he returns to a more clean and acoustic approach. His extensive knowledge of Mandingo traditions is also made available for children in his illustrated book « Cocorico ! Balade d'un griot », which also contains a CD with tales and music.

His sister Mama Kanté is also involved in music, as are his son Balla Kanté and his daughter Manamba Kanté. Mory Kanté was chronically ill since some time, and received periodic treatment in France, but due to the COVID-19 Corona crisis in 2020, he was not able to travel outside of his home country anymore. He died in a Conakry hospital on 22 May. He left a wife and children, and a vast legacy. 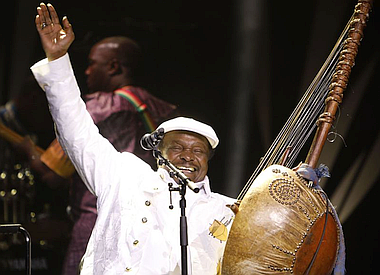