Biography
Djeneba Seck (also spelled Dieneba Seck) was born in Bamako, in a family that has its roots in the town of Kita, famous for its musicians. Her parents worked in the health sector and have no griot tradition. The young Djeneba, who was very shy, found that being a theatre actress was a way to deal with her timidity, and she became soon very popular as a comédienne. Her parents actively supported her in these activities.

In 1986, Sékou Kouyaté created his own band, and asked Djeneba to join as backing vocalist. Her presence was instrumental in the first successes of the band and for Malian TV they recorded a song « N'an Kadignon Yé » which was a big hit on the still young TV channel of Mali.

The success was not for long as Sékou Kouyaté left for France. Djeneba remained, however, active in theatre but also in music with Orchestre Bama Saba and with a music project about health promotion by Peace Corps in Mali. In 1991, when winds of change brought a turn to democracy in parts of Africa, she recorded a first solo album, of which the title song « Kankélétigui » (person speaking with one tongue) became a hymn of transition to democracy. Djeneba became the queen of Malian music.

In the following years, she recorded various albums, such as the 1996 « Kounkanko Kononi » and the 1999 « Djourou », the latter produced by Ibrahima Sylla with arrangements by Sekou Kouyaté, who she married around that period. In between, Syllart invited her to participate in the medley album « Sans Papiers: Grobinées » (1997), alongside Hadja Kouyaté and Sona Tata Condé. In the first decade of the 21st Century, Malian music suffered considerably of the proliferation of piracy of albums made producers and promotors lose a lot of money and it was increasingly difficult to find an investor to produce an album. The frequency of new albums decreased, also for Djeneba. Despite the success of her previous albums, it was only in 2005 and 2012 that she was able to release a new album. 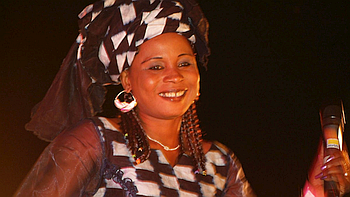