Biography
Although the debut album of Coco Mbassi wasn't released until 2001, African music fans knew her name since years, as she was a much solicited backing singer in Paris. She featured on numerous Paris recorded albums of, for instance, Salif Keita, Touré Kunda, Anne-Marie Nzié, and Manu Dibango.

Already at the age of seven, Coco won a singing contest for kids in Yaoundé and she knew then that, one day, she would become a singer. In 1983, she moved to Paris to live with her elder sister. She went to school and university and got acquainted to European culture and music. Years later, she wanted to rediscover her African roots again and took African dance classes. In the early 1990s she started working as a backing vocal singer. An award of the RFI "Prix découverte" for her song « Muengue mwa Ndolo » in 1996 helped her to start a solo career, which materialised a couple of years later, because she gave birth to two sons in the meantime...

After two albums that were well-received by critics, she participated in the Live 8 Africa Calling festival and in December 2005, a first DVD, « Tour » features the artist's full band in concert, as well as acoustic performances of some songs. It also includes interviews and "behind the scenes" and previously unseen footage of fun moments, rehearsals and even a trip to Cameroon.

In 2014, Coco came back with a new album, « Jóa », revisiting her musical roots. Apart from rhythms from Cameroon, she also uses rhythms from Mali and Senegal. The track « Bazor » is a subtle interpretation of Dina Bell's work. 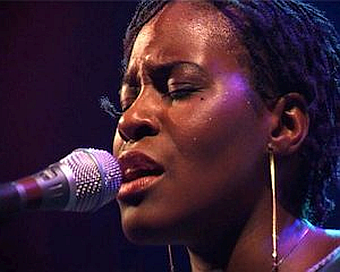