Biography
Metzo Djatah is a young Senegalese musician who grew up in Dakar but lives in Nancy (France) since years now. Already in Senegal he learnt to play various instruments (bass, drums, percussion, and guitar). He played in various band in Dakar, on various instruments. He went to France to study, but after finishing his studies in social science, he decided to concentrate on music and soon a first self-produced album found its way to French radio stations. The album « Diembéring », named after the small coastal town in the Casamance region where Metzo was born, offers 12 songs in what is called "African urban folk". Its success in France led to the re-release by a French record company M10 in 2002. His talent as a composer, multi-instrumentalist and text writer became obvious, both on the album and during numerous concerts, mostly in an acoustic setting.

In 2003, he released in Senegal a second album « Deugueul Mbeugel » that was recorded both in France and in Senegal, and mixed the acoustic folk music of the first album with m'balax rhythms of Senegal. On the album, he could count on the contribution of musicians coming from bands such as le Setsima and Nakodjé. Other artists appearing on the CD are Mbegane N'Dour of the band Djoloff and Porc-épic, a young rapper in the song « Agresseur ».

Metzo Djatah remains faithful though to the acoustic Senegalese folk, a style that already brought to the forefront singers like Diogal Sakho and Seydina insa Wade. He toured in France in spring 2004, but didn't forget his Senegalese roots as he went to Senegal subsequently to promote his latest album. 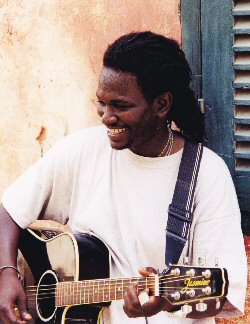