Biography
Djoloff has been formed by Aumar Sow, Doudou Seck, and Mbegane Ndour. The band is named after the ancient Djoloff kingdom in what is now Senegal.

Inspired after a meeting with master drummer Doudou N'Diaye Rose at the Africolor festival, they discovered the roots of the lawane, a narrative musical form of expression used by griots. The rap of Doudou Seck, combined with the traditional rhythms and melodies, results in a refreshing cross-over.

The popularity of rap and hiphop in Africa, and Senegal in particular, is overwhelming, and many bands have been created. Only few manage to break through by signing for a big label. All three members of Djoloff were already in France when they started to mix hiphop with African elements.

The album « Lawane » is their first and only international CD release.

Aumar Sow continued as a solo artist using the name Aumar Pulho Sow and released an album « Anndin » (2014). The same is true for Mbegane Ndour who worked on a project album « African Consciences » (2003), and a single « Jamm » featuring Hakim in 2008. 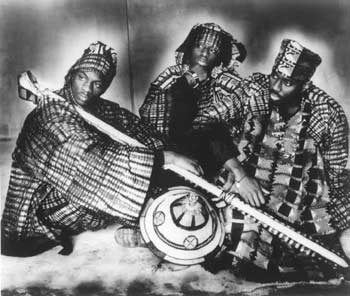