Biography
Alain Makaba is a talented guitarist who was part of Wenge Musica BCBG since the early years. He contributed to successful albums such as « Kin E Bouge » and « Titanic ». Alain decides to record a solo album in 1995, without informing or asking permission from Wenge leaders Didier Masela, J.B. M'Piana and Werrason. It has been stated here and there that this might have lead to the division of Wenge Musica into J.B. M'Piana's Wenge BCBG and Werrason's Wenge MM, but this had been denied by J.B. M'Piana. J.B. M'Piana supported Alain Makaba in his solo effort as J.B. himself was preparing a solo album « Feu de l'amour ». It was rather the release of « Feu de l'amour » that created jealousy among some members, mainly Werrason. In any case, after the division in December 1997, Alain Makaba continued to work with J.B. M'Piana.

Makaba developed in a multi-instrumentalist, besides being among the best Congolese guitar players, as he specialised also on programming and playing keyboards. On his first solo album he left the singing to various guests singers, such as Sam Mangwana, Dindo Yogo, Luciana Demingongo, Abby Suriya, Ballou Canta and Kester Emeneya. After some time, he decided to leave Wenge Musica BCBG and concentrate on other musical activities. Alain Makaba features as guest musician on other CDs, such as Papa Wemba's « Bakala Dia Kuba ».

In 2003, he releases a second solo album, where again he shows his talent as composer and multi-instrumentalist. The album distinguishes itself from many present-day Congolese albums by its production quality and variety in styles. 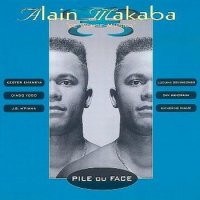