Biography
Sidi Touré is, like the famous Ali Farka Touré, a songhaï from the north of Mali, but unlike the latter, Sidi is from Gao, the capital of the ancient songhaï empire.
During his childhood, Sidi Touré was the lead singer of the school band, but his family was initially opposed to a potential musical career. Nevertheless, in 1976, he became member of the regional orchestra of Gao, the Songhaï Stars. At that time, the government of Mali supported cultural and musical expression through bi-annual festivals (Biennale), where each region of Mali was represented by an orchestra and a traditional ensemble. Although at first, he had to sing in Bambara, but at the Biennale of 1984 he won the award as the best singer with a song of his own hand, « Manou Tchirey », a song in Songhaï. In 1986, he won the same award again, and his band toured in the north of Mali and in Niger, areas where Songhaï is spoken. Success in the rest of Mali, however, did not occur. In 1990, the band broke up, and after a year singing with the Carnaval Band of Maradi in neighbouring Niger, he went to Bamako in 1992 and was asked to sing for National Badema, the band where Kassemady Diabaté was a lead singer. Sidi's wish to bring forward the music of the Gao region to a wider public was finally realised when he was given the opportunity to record a first solo album in 1995, « Hoga ».

The world had to wait 16 long years for the release of a second album, that was recorded as a live "field-recording" style at Sidi's sister's house. A new studio album, « Koïma », was released only one year later, in 2012. 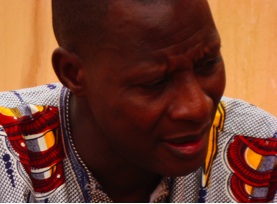