Biography
Sali Sidibé is another exponent of wassoulou style of music, predominantly performed by female singers from the South of Mali. In the footsteps of the pioneers Kagbe Sidibé and Coumba Sidibé, Sali became one of the most popular Wassoulou singers in Mali. Her music is somewhat different from that of Oumou Sangaré, but more similar to the style of Nahawa Doumbia since she is using the same didadi rhythm.

Unlike the malinké praise singers, these young artists addressed contemporary issues in their lyrics, such as social problems. Although the singers are mainly Peul they are singing in the wassoulou dialect of the bambara language.
The pentatonic wassoulou music itself is very distinct from malinké music and is reminiscent of the rhythms of Malian hunter music played with the Dozon N'Goni (hunter's lute), but using instead the smaller Kamelen N'Goni (6-string youth lute). Other instruments used are the traditional one-string violon, the soukou, the M'Bolon (bass lute), the Senoufo balafon, the Djembé and and also the electric guitar. The rhythms are repetitive and hypnotising, but there is room for improvisation on the string instruments.

Although her family was opposed to a musical career (her father being a marabout), Sali started singing in the Ensemble Instrumental National du Mali in the early 1980s, during which she recorded two albums. In 1987, she formed her own ensemble, and their cassette « Tounkan Magni » was a big hit in Mali, before anyone had heard of Oumou Sangaré.
Few recordings of her were internationally distributed, but on the two Wassoulou Sound samplers released by Stern's Music, there were a few Sali Sidibé tracks, such as « Wale Gnouma Don », « Djen Magni » and « Ntanan » on vol. 1 (1991), and « Gnouman Ke La » on vol. 2 (1994).
The album « Wassoulou Foli » was the album that made her famous. 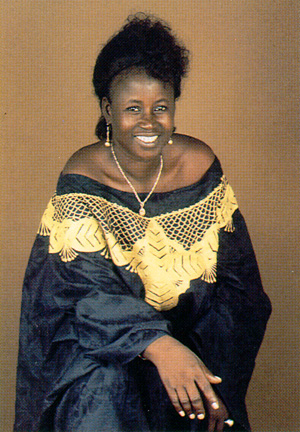