Biography
Oumou Sangaré recorded her first cassette in 1989. When it was officially released in 1990, it became an enormous hit in West Africa. Throughout the 1990s, Oumou became increasingly known and loved among both African and Western audience. Her silky voice, the rootsy yet accessible music, and her criticizing lyrics addressing modern time issues, contributed undoubtedly to her success. She specifically addresses to Malian women in her lyrics, singing about their sometimes precarious livelihoods. Oumou became an emblematic figure for women's emancipation in Mali.

On her 1996 album « Worotan », she added horn instruments (a.o. by Pee Wee Ellis on saxophone) without spoiling the authentic sound of the music from the Wassoulou region in Southern Mali.

Oumou continues to release an album occasionally, but she also became increasingly active in business, thus showing once again to African women that they can be emancipated and independent. She built a hotel (Hôtel Résidence Wassoulou) and she started importing Chinese cars for the local market under her own name (Oumsang).

After many years she comes back in 2009 with a stunning album receiving extremely positive acclaim from the music press:

Daily Telegraph:
« Does the world need another Oumou Sangare album? It most certainly does. »
Songlines:
« ..., Seya is a massive album of 11 big-hitting tracks that leaves the listener breathless. » 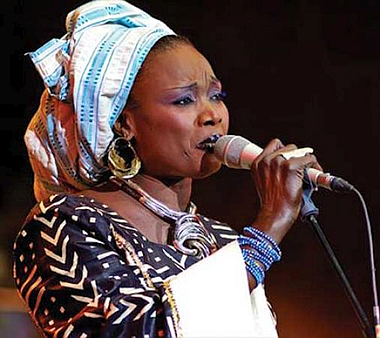