Biography
Nanou Coul started singing at the age of 8 years old. In her neighbourhood Saladié in Bamako she was known as a solo singer, and from 1984 to 1990, she participated in the bi-annual cultural festivals known as the Biennales Artistiques Culturelles du Mali. She was 'discovered' by producer Ali Maikano, but the two went separate ways later on. Nontheless, a first album, « Tiéba », produced by Maikano turned out to be a hit. After that, she released several cassettes in Mali.

Nanou Coul performed at the prestigious Africolor Festival in 1999 near Paris (Saint Denis). In 2000-2001, she participated in the Mali Dambé Foly, la symphonie bambara Tour, together with Abdoulaye Diabaté, Neba Solo, Moriba Koïta, Djigui Traoré and Sibiri Samaké. She also featured as backing vocal on Djeneba Seck's albums « Djourou » (1999) and « The Truth » (2005).

Nanou Coul's style is closer to bambara music in the style of the big orchestras than to griot music, which could be explained by the fact that she is not from a griot family (the Coulibaly family is a noble clan). She sings in Bambara and in Soninké about women, children and educational issues. 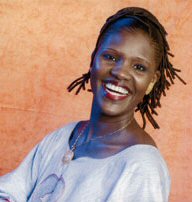