Biography
Bako Dagnon (also written as Backo or Baco Dagnon) released a first CD in 2007, but she is part of a generation of prominent Malian griots that becomes known in the first decades after Mali's independence. Born in 1948 or 1953, she started singing as a child, accompanying her mother at ceremonies such as baptisms and marriages. Being a griot, she learned the genealogy and the history of Mali, in order to sing about Mali's great past, which goes back to the Mali empire of the thirteenth century. After having participated at local shows in Kita, she was selected for the Biennale of Bamako in 1972 to represent her region.
At the Biennale, she was very successful with he song « Yiri Kolo ». In 1974, she was recruted to join the Ensemble Instrumental National du Mali, where she stayed for 10 years.
Along with great female singers such as Mokontafe Sacko, Sarafing Kouyaté, Wandé Kouyaté and Nantenedié Kamissoko, she helped developing and promoting traditional Malian music with the Ensemble Instrumental. Moreover, the dean of Mali music, the late Bazoumana Sissoko, invited her several times to sing at his house.

Although virtually unknown outside Mali until the release of « Titati », she has produced five cassettes in Mali over the years. But her importance for Malian music goes beyond that, her encyclopaedic knowledge of Malian languages, traditions and history was well-known, and Ali Farka Touré is said to have asked her several times for the exact meaning of particular songs. She was a guest singer on Mamani Keita & Marc Minelli's « Electro Bamako » album (on the song Donso Ke). When Ibrahima Sylla of Syllart Productions asked her to join in the recording of the second volume of the « Mandekalou » project, the road was open to recording an album of her own.

« Titati » was mainly recorded in the Bogolan Studio in Bamako and partly in Paris, and arranged by François Bréant Salif Keita's « Soro », Bambino's « Sinikan »). The album offers a very interesting mix of ancient songs and modern arrangments, Bako's sublime voice and the variety of the repertoire makes this album an instant classic. 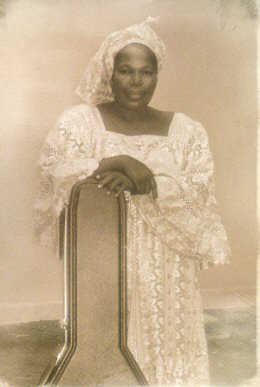