Biography
Charlotte Dipanda is a young and very talented singer songwriter. Born in Cameroon's capital Yaoundé in 1985, she grew up between Yaoundé and Douala, where she lived with her grandmother, as her mother was very young when she gave birth to Charlotte. At times, she lived in the town of Mbouda in the Western part of Cameroon with her uncle. As a teenager, she was increasingly fed up with waking up at 6 o'clock every day to go to school, making music was for her a way to forgot about school.

At young age, Charlotte began to sing, and during a open-mic session at a club in Yaoundé she met Congolese singer Lokua Kanza. She was asked to sing the vocal parts on the album « Ndando » by guitar player Jeannot Hens, an album that was released in 2002. By then, she had left Cameroon for France, where she contacted Lokua Kanza again, and she started working as backing vocalist. On stage or in studio sessions, she has worked with many artists, such as Papa Wemba, Manu Dibango, Idrissa Diop, Rokia Traoré and French singer Axelle Red.

In 2008, she released her first solo album « Mispa », an acoustic album of sheer melodic beauty, that was recorded with the help of Guy Nsangue. On the album, she wrote a posthumous letter to her grandmother who raised her, and also a tribute to Jeannot Hens.

In 2011, a new album « Dube l'am » saw the light, with bass hero Richard Bona and zouk-legend Jacob Desvarieux featuring each on a song. A third album « Massa » followed in 2015.

Charlotte sings in Douala, in her native language Bakaka, and in French. 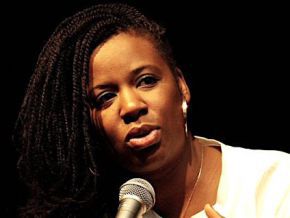