Biography
Blick Bassy's increasing popularity may be of recent date, his involvement in music goes back to the early 1990s. He grew up with singing in church choirs on Sundays, his interest in music was triggered when he was sent to the village of Mintaba at the age of 10, to get a traditional education. His grandparents initiated Bassy into traditional customs and culture. He discovered the variety of rhythms such as the Bolobo (chant for fishing), the Dingoma (chant and percussion for the inauguration of Mbombock chiefs), the Bekele (chant and percussion for weddings), the Hongo (chant for funerals) and the Assiko (guitar percussion, chant and dance). He met a travelling musician who stayed during some time in the same village, and who learned him to play guitar. From his mother he learned to sing.

When he was 17, he started his first band, Jazz Crew, playing a fusion of African melodies, jazz and bossa nova. In 1996, he started Macase, a reasonably successful band in Cameroon. Macase made a few albums, « Etam » (1999), and « Doulou » (2003). The band received national and international acclaim, for instance via the Prix RFI Musiques du Monde in 2001. There were also successes at the MASA in 2001 and the Kora Awards in 2003. Yet, a real break-through was stopped by problems of distribution.

In 2005, it was time for Blick to look for new adventures, and he moved to France. He met and worked with Manu Dibango, Cheikh Tidiane Seck, Lokua Kanza and Etienne Mbappé. He recorded his first solo album partly in Paris, partly in Bamako, in the studio of Salif Keita, hence the strong Westafrican feel of the album.
On his second album, « Hongo Calling », he retraces the tragic "slave route" from Cameroon to Brazil, passing through Benin, Senegal and Cape Verde. In the course of his musical travels, he uncovers the missing link between the two continents that share so much. 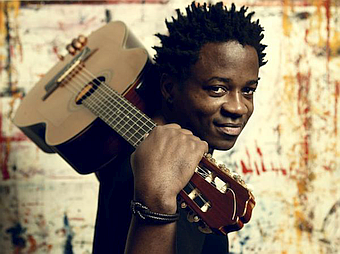