Biography
Etienne Mbappé is yet another example of a Cameroonian bass player excelling on an international level. He has been influenced by famous bassists Jean Dikoto Mandengue (former bass player of Ghanaian super group Osibisa), Vicky Edimo and of course Aladji Touré. Just like his famous fellow-Cameroonian Richard Bona he has worked for a long time with various groups, before tempting to start a solo move.

Mbappe left Cameroon for France in 1978, where he studied classic guitar and contrabass. He met many musicians over the years. During the 1980s he has been playing with the French Orchestre National de Jazz, and with fusion-jazz band Ultra Marine. In the early 1990s, he has accompanied Salif Keita on his tours, and he has worked also with a variety of artists, such as Pierre Akendengue, Ekambi Brillant, Henri Dikongue, and Mayra Andrade. Since 2000, he has worked extensively with Joe Zawinul and he was a full member of the Zawinul Syndicate. Since 2010, he plays regularly with John McLaughlin's 4th Dimension.

With this broad experience acquired over the years, Etienne Mbappé wanted to take his time before making a solo album, which eventually appeared in 2004 as « Misiya ». It is an album that offers a variety of styles, makossa, ambassebey, assiko, but always with a jazzy feel. The whole recording is done near to perfection, unfortunately, his voice isn't as airy and angelic as Richard Bona's voice. Nevertheless, Etienne's talent as a bass player stands beyond discussion. 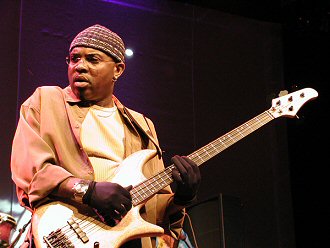