Biography
Kareyce Fotso is a young singer from Bamiléké (Bandjoun) parents, but she grew up in the popular neighbourhood of Mvog-Ada In Yaoundé surrounded by the Beti people. She learned to speak Ewondo and she now sings in this language with even greater ease than in her mother tongue. Her father was a sculptor, her mother a business woman (Bayam-sellam) and a weeper (hired to mourn at funerals). Father Fotso knew the hardships of life as an artist and refused a similar life for his daughter, preferring a career for her in medicine. She thus enrolled at the University of Yaoundé studying biochemistry. Kareyce was not happy at all at university, although she stayed there for three years, and she held on to her dream of being involved in music. Inspired by the music of Anne-Marie Nzié she had listened to for many years, she began to sing in cabarets in Yaoundé, and worked as backing vocal for Cameroonian artists, such as Sally Nyolo. In 2001, she became singer in Korongo Jam, with them she toured extensively and gained some notoriety. This was until 2006 when Korongo Jam split up, some musicians stayed in France, others settled in the United States. Kareyce preferred to go back to Cameroon and start a solo career by herself. She sang again in the capital's bars, and started composing songs for a first album, « Mulato », which was released in Cameroon in 2009.

Kareyce won a silver medal at the « Jeux de la Francophonie » in 2009 in Lebanon, and a few weeks later she was one of the finalists at the « RFI Découvertes ». A French fellowship enabled her to come back to France where she met many artists she admires, and especially Richard Bona encouraged here in her career. She used the occasion to record a first international release for the Belgian label Contre-Jour. She uses her exceptional voice and the harshness of the Bandjoun language, combined with traditional instruments, such as the sanza and the talking drum, to create a powerful musical cocktail, both on stage and on her album. 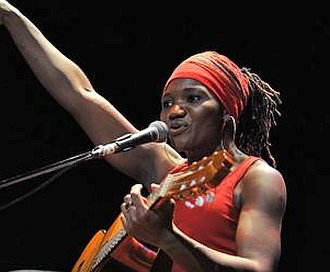