Biography
Erik Aliana was born in the village of Badissa in the Mbam-et-Kim division, the most northern division of the Central Province of Cameroon. Son of a teacher, he grew up in this predominantly rural area but pursued his schooling in the capital Yaoundé. During his teenager years he was formed by the urban culture of Yaoundé but he spent every holidays in Badissa and therefore never lost contact with his culture of the O'Sananga people.

At the age of 8 years old, he was given a drum kit on which he learned to play by himself. Over the years, he participated in a variety of school bands and started to perform by 1995. In 1999 he left University and created his band Korongo Jam.

By then, Erik has made some fame as a singer, drummer and percussionist, and he worked together with other artists on various projects, for instance with the Cameroonian band Takam II in 2004. He also worked with Swiss band Tasch on three songs of their 2006 album, and features on the album « Identité » by Doc Indigène (from Île de la Réunion), where he did the percussion and vocals. In 2003 and 2004 he performed with Korongo Jam at various festivals in Europe such as the Musiques métisses (France) and the Afrika Festival Hertme (The Netherlands).

In 2006, he managed to release a first album with his own band Korongo Jam, « Just Africa ». Erik Aliana's real breakthrough though was his 2011 album « Songs from Badissa », on which he revisits his musical roots and his musical memories, such as the percussion, the balafons but also the « kindo », the O'Sananga form of bikut-si music. He is therefore sometimes referred to as the ambassador of O'Sananga culture and of the heritage of Kindo music. 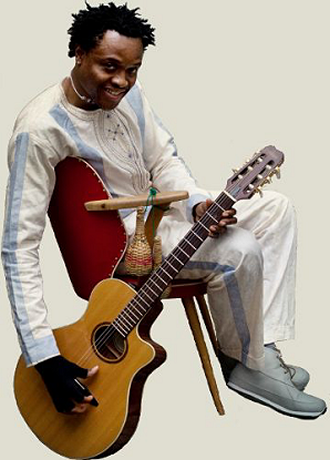