Biography
Daby Touré is a young musician of mixed Senegalese and Mauritanian descent. Daby is a son of Hamidou Touré, who was part of Toure Kunda for a few years since 1989, and who would later become known for his solo albums as Seta Touré. Unlike his brothers who grew up in the Casamance region in Southern Senegal, Hamidou was brought up by an uncle in Mauritania. After his medical training in Nouakchott, he was sent to a sand blown desert town called Boutilimit, where he married a beautiful woman, who was half Moorish or Hassaniya and half Toucouleur. They gave birth to a son who they called Daby, in honour of his grandfather, the patriarch of the family.

This is why Daby Touré grew up in Mauritania, then in the Casamance, and later on the southern bank of the Senegal river where he got acquainted not only with his own Soninké culture but also with the neighbouring Wolof and the Toucouleur. A few years later, he moved back to Nouakchott to live with his father who had divorced from Daby's mother. His father sometimes played guitar at home, and Daby would play secretly at his father's absence.

In 1989, when the Senegalese-Mauritanian border conflict came to an outburst, Hamidou was invited by the Toure Kunda brothers to play in their band in Paris. Daby, 18 years old then, went with his father and in Paris he was exposed to the African music and jazz scene. He gave up his studies soon and teamed up with his cousin Omar Touré and together, they formed Touré Touré. They made only one album together, with reasonable success in France, but Daby wasn't satisfied and decided to go on his own. This resulted eventually in his first solo album « Diam ». The album was well received by the critics. Daby has played many of the instruments himself, using a variety of influences and styles. In 2007, he released « Stereo Spirit », again an album filled with catchy rhythms and superb melodies. 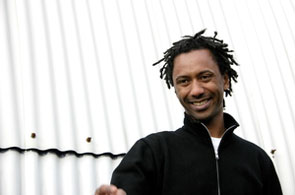