Biography
Angélique Kidjo is one of the biggest names in African music since the beginning of the 1990s. Born into a very musical family, she began to sing with her brothers in the Kidjo Brothers Band. By 1985, she went to Paris to pursue her career, first as a backing vocalist, and from 1984, she was the lead singer of Dutch afro-jazz group Pili Pili.

Today, she hardly needs an introduction anymore... With her own band since 1988, she recorded the album « Parakou », which was already a huge success. In 1998, she moved to New York with her husband and daughter. The next three albums, « Oremi » (1998), « Black Ivory Soul » (2002) and « Oyaya ! » (2004) form a trilogy, exploring the African roots in, respectively, North American, Brazilian and Caribbean music.

In 2007, Angelique returns with an album that partly goes back to here Beninese roots, but also seeks for cross-over with various international styles, and the album features a large number of guests such as Josh Groban, Carlos Santana, Alicia Keys, Joss Stone, Peter Gabriel, Amadou and Mariam, Ziggy Marley, and Branford Marsalis. She won a Grammy Award in 2008 for this album « Djin Djin » in the Best Contemporary World Music Album category. Her 2010 album « Oyo » was nominated in the same category. She received a Grammy for Best World Album 2014 and 2015! 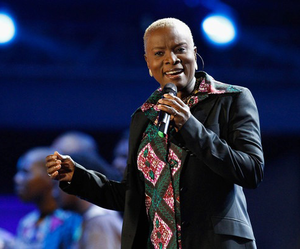