Biography
Amadou Bagayoko and Mariam Doumbia met each other at the Bamako Institute of the Young Blind. Both turned blind when they were young, Mariam when she was only five years old, Amadou at age of 16. After some time, Amadou realised that, without Mariam being around, his life was senseless. So he asked her to stay with him forever, which she accepted. Both played in the band of the Blind Institute, the Eclipse Orchestra led by Idrissa Soumaoro. Amadou also played guitar in Les Ambassadeurs. They married in 1980.

In 1986, Amadou and Mariam went to Abidjan, and from 1989 on, they recorded five cassettes in Abidjan. All cassettes achieved a huge success, especially in Mali. Their songs are very accessible, sung by both Amadou and Mariam. The lyrics are mostly in Bambara, although some songs are in French, addressing popular themes and current problems in Malian society. On the first two cassettes, the singing of Amadou and Mariam is just accompanied by Amadou's guitar, on later volumes, more instruments were added.

Their first CD « Sou ni Tile » has been recorded in Europe, with some new songs and others already published on one of the cassettes. One song of that album, « Je pense à toi », has made them known among a much larger audience and sold 100,000 copies in France. Since then, a compilation of older songs (the CD « Se Te Djon Ye ») and new recordings were released on a regular basis.

As on « Sou ni Tile », later albums were characterised by the same combination of bambara melodies and rhythms with instruments and influences from outside of Mali. For their 2004 album, Amadou and Mariam worked with Manu Chao who left a strong imprint on the album. It brought them two BBC Radio 3 Awards and a platinum disc in France.
Amadou and Mariam always welcomed other musicians for featurings, among many others there were Tiken Jah Fakoly on « Politic amagni », and on their 2012 album « Folila » they worked with Santigold and Bertrand Cantat, known as the singer of Noir Désir. 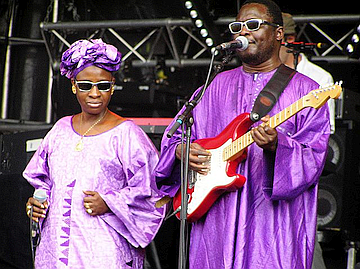