Biography
Le Général Defao has become particularly popular as a singer, dancer and band leader especially during the 1990s. He started singing in local bands in Kinshasa as early as 1976, for instance in Orchestre Suka Movema, Fogo Stars, Korotoro and Somo West. Defao was influenced by Zaiko Langa Langa singers of the early years, Papa Wemba, Nyoka Longo, Gina Efonge and Evoloko, but Tabu Ley Rochereau was and still is his main inspiration.

In 1991, he created his own band, les Big Stars and recorded a number of albums since. A gifted singer and dancer, Defao has become quite famous in Central Africa. He was one of the first Congolese musicians who valued the importance of TV appearances and videoclips as a means to gain success. Defao is known for his exuberant lifestyle, always well dressed and apart from being a singer he is also a gifted dancer. In search for a representative appearance, he has been struggling with a weight problem for years and was trying to lose some of his 115 kilogrammes. In 2001 he left Kinshasa for Zambia, and settled later in Nairobi, Kenya.
After 2000, he was sometimes written off by the critics and by the public, as he wasn't able to continue his successes from the 1990s, but his latest album, bearing the curious title « The Undertaker » proves that he still has the talent to make people dance. The commercial success was limited because of a lack of promotion.

In December 2021, Defao was in Cameroon for a New Years Eve concert. Unfortunately, he fell ill and a Covid19 infection proved to be fatal in conjunction with his diabetic condition. 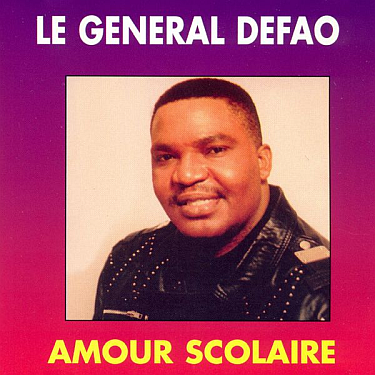 Sources Thanks to Dolf Motz for his help in compiling this discography
afroriginal.blogspot: Defao
The Citizen (Tanzanian newspaper): Congolese singer General Defao dies ahead of his New Year show in Cameroon
Page added April 2002